Here you can find our Triskele products on ethnos

read in Italian
read in Spanish
The Triskele, also called Triskelion, is the best known Celtic symbol, and embodies the power of the number Three; it usually consists of three spirals joined together, but it can also be represented by the union of three other decoratif elements. For the Celts, the meaning of this symbol varied depending on the direction of rotation of the spiral: if clockwise, it represented the quiver of the internal energy in its expansion towards outside; counter-clockwise, it symbolized the descent into the underworld, viewed as a more introspective and inward action. 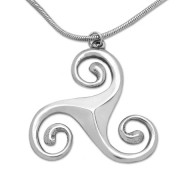 Il Triskele ha diversi significati e rappresenta in primis The Triskele has several meanings and represents primarily the Triple manifestation of the One God: Strength, Wisdom and Love, hence the three classes of Celtic society that embodied these energies: Warriors, Druids and Artisans.
The three spirals indicate also the three circles of existence: Ceugant, the World of the Absolute; Gwynwydd, the Spiritual World of the Afterlife, and Abred, the Human World or the World of the Trial.
The Human World, Abred, is composed of the three aspects of the material world: Earth (Wild Boar), Water (Salmon), Sky (Dragon) which, through their movement, are all reunite in the fourth element, Fire, symbolized by the circle that often encloses the three spirals, the Triskele.
Other meanings of the Triskele are:

This website uses cookies to improve your experience while you navigate through the website. Out of these, the cookies that are categorized as necessary are stored on your browser as they are essential for the working of basic functionalities of the website. We also use third-party cookies that help us analyze and understand how you use this website. These cookies will be stored in your browser only with your consent. You also have the option to opt-out of these cookies. But opting out of some of these cookies may affect your browsing experience.
Necessario Sempre attivato