The sure facts regarding this ancient form of divination are few: it is difficult to know both the exact dating or the precise location of their birth on the continent, but we know that these signs were known and used in Sweden already during the Bronze Age, about 1300 BC, used as a written alphabet to draw up legal documents and to write prose and poetry related to the divinities of the Sun. It is known, moreover, that their last appearance dates back to the Middle Ages, when they were still in use in the Icelandic population. 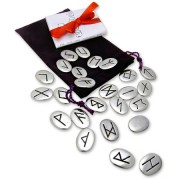 Before the Germanic peoples possessed any form of writing, the signs used to communicate were the ones already known and used in the Scandinavian populations: these early writings took the name of Rune, from the Gothic, “secret, mystery.” Soon these symbols were used for predictions, evocations and in ceremonies, thus favoring their development and their importance to the point that they began to be engraved on cups, on amulets used in rituals, on warriors’ weapons and on prows of Viking ships. They bestowed honors, riches and huge awards to those who knew how to interpret their meaning whenever this became necessary.

Lettura in Italiano  –  Lectura en español
The so-called Masters of the Runes, Viking and Teutonic, mostly women, were in fact honored, celebrated, welcome and feared at the same time. These shamans became familiar figures within the tribal circles: they always carried a bag containing irregular pebbles with runes engraved on one side, and once the head of the clan had made his request, they extracted the pebbles from the bag and then read the meaning of only those symbols that came out face up.
This form of prediction was especially used before forthcoming battles, when warriors had auspicious runes engraved on their weapons in order to ensure victory: therefore, among all the runic inscriptions survived to our days, the most popular is “unleash the spirit warrior”. 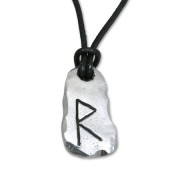 According to Roman historian Tacitus, these symbols and their form of reading and interpretation were known all over Europe in the first century AD. At that time the Runes accompanied warriors, merchants, and clergymen, and such development increased their fame and the knowledge related to them. Thus was born the need to create a single alphabet, recognizable to all, and, for this purpose, was created the so-called “Futhark Alphabet”, composed of 24 runes divided into three groups of 8 letters each (according to tradition numbers 8 and 3 possess special powers), each group named according to one of the main Scandinavian deities:

Later, the Anglo-Saxons brought to 33 the number of letters and introduced the Mystic Rune, representation of the unknowable, of the unknown and of the divine, on which there is no emblem engraved.
The slogan that accompanies the reading of the runes is the same as the Oracle of Delphi: “Know Thyself.” 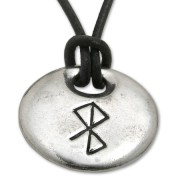 They allow us to overcome the limitations of reason, freeing our inner energy and unleashing the wisdom that our unconscious contains. Therefore, whenever we come into contact with our inner self through the runes, we can hear a force talking from within. Runes and their interpretation provide a guide to the knowledge of our inner self, to explore the most intimate part of our being.
They do not predict the future, but focus our attention on our unconscious abilities, and show us how to use them to best according to what we are experiencing at the moment; a bridge to our most instinctive and irrational part, a mirror through which we can glimpse our psyche.

Important Note:
The small Runes available on this website, we remind you that on Ethnos is available a bag with the whole set) have been associated with the zodiac through an interpretation made by an anthropologist, who has combined each rune with the zodiac according to their meaning.
In order to avoid semantic ambiguity, we underline that this is an interpretation made in view of a simplified and understandable approach to the runes.