The Eight Symbols of Good Omen of Tibetan Buddhism – Astamamgala, always present in Tibetan culture, they are objects that have played an increasing role in ceremonies and rituals up to be considered sacred. They are symbols of protection and guide to happiness and serenity; all symbols are interrelated and can not exist separate, since their effectiveness is manifested in their unity.
Lettura in italiano  –  Lectura en español 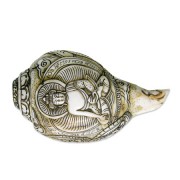 Ancient ritual object of Indian origin, the white shell is usually expressed with the spiral that evolves to the right and ends in a point. Symbol of the Deity in its feminine form, of royalty and superiority, it is the representation of the deep, and victorious sound that spreads the teaching of the Dharma, reaching and being transmitted to the different natures, passions and spiritual aspirations, awakening all beings from the abyss of ignorance and suffering in order to achieve and attain liberation.

THE GLORIOUS ENDLESS KNOT, or INFINITE LOVE KNOT – SRIVATSA
Composed of continuous and closed lines that intersect each other, it is associated with the primordial symbol of the endless becoming and emblem of the incessant manifestation of the world, reminding us of how phenomena are interconnected to causes and conditions. It represents the union of Wisdom and Method, the female energy and the male one, their harmonic inseparability, in a state of infinite love, infinite life and achievement of unity. It is the ultimate auspicious symbol, reminding us that every positive and favorable effect in our future has its roots and causes in our present actions.

THE GOLDEN FISH
The two fish are represented vertically and parallel and originally symbolized the sacred rivers Ganga and Yamuna. Allegory of the Lord of the World, gold fish are depicted only together with the other auspicious symbols: they express the hope and desire that all living beings can exist in a state of absence of fear, saved from the danger of falling into the ocean of suffering, and free thanks to the awareness of their primary essence, as well as the fish swim in the sea free by nature. 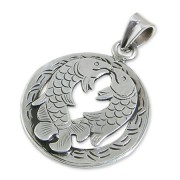 THE LOTUS – PADMA
It is the highest vision of Purity and Beauty: the stem of the lotus rises in fact from the muddy waters of ponds and lakes to make bloom an uncontaminated flower, incontaminabile, immaculate and perfect above the water surface, the only plant that thanks to the strength of its stem makes a flower bloom with a number of petals always regular, from eight to twelve, all the same. In their symmetry petals represent the harmony of the Cosmos, eight as the eight spokes of the wheel of Dharma. Mud represents suffering and all that holds our being from acquiring that clear vision that through the practice of the Doctrine, the stem, will allow us to rise above the pollution of the world. The lotus is also a symbol of purity of body, speech and mind: it is the very essence of our being that has remained immaculate despite the mud of the world; essence that is realized only through the light of our awareness. The Lotus flower is the throne of the Buddha i.e. of Compassionate Love of which the Dalai Lama, also called the Lord of the White Lotus, is the embodiment. 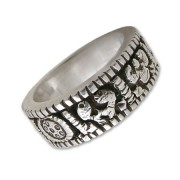 The parasol is a symbol of Royal Dignity, of those who hold the spiritual power. in Tibetan iconography is present in several variations, more or less elaborate and colorful, and always supported by a solid wooden structure. It expresses the perfect energy of the Dharma to protect all beings who follow the Doctrine from obstacles and opposing forces, disease and ignorance, pain and rebirth in the lower realms, so that they may attain the complete extinction of suffering.

THE VASE OF THE TREASURY – KALASA
The use of the vase goes back to the beginnings of Buddhism, and was acquired by the Indian tradition where it was used to find water; metaphorically relates to the realization and the ability to fulfill material desires. Its shape is generally swollen with a long neck and on its top is placed a jewel to indicate the preciousness of its content: the nectar of immortality, linked to the Eternity of Doctrine and Knowledge.

THE WHEEL OF DHARMA – CHAKRA 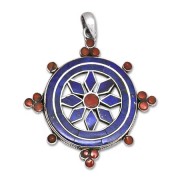 The Wheel of the Doctrine or of the Law, is the most widespread and ancient Indian symbol, referring to both the Sun and its attribute of weapon.
The wheel is made up from the hub, the spokes and the rim: the hub is the Unmoved Mover, the primordial essence of the mind; the spokes are equal to the Noble Eightfold Path to go in order to achieve liberation from suffering. The Eight Paths are: right view, right intention, right speech, right action, right conduct, right effort, right mindfulness and right concentration. The rim symbolizes the world and its continuous and eternal perpetuation until the defeat of ignorance, which is the root of suffering.
Another interpretation of the wheel sees the hub as the practice of Discipline, by which the mind is supported and made solid; the spokes are the practice of Wisdom in understanding the emptiness of all phenomena that lead to the eradication of ignorance and evil; the rim indicates the teaching of meditation that supports each practice of the Doctrine.
The Wheel of Dharma is therefore the universal symbol of the Doctrine that leads to liberation from pain, represents the teaching of Buddha and reminds us that the Dharma, the Universal Law, embraces and completes all in itself, has no beginning or end and is beyond time and space.

THE BANNER OF VICTORY – DHVAJA 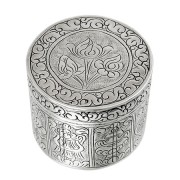 Commonly made of wood and silk, more or less refined, is usually suspended in the center of the ceiling in the main hall of the monasteries and also in private homes. Similar to a rolled-up flag, represents the victory of body, mind and speech of each of us when using the Dharma practice, demonstrates the power and the triumph of knowledge over ignorance and fear, the attainment of ultimate happiness