According to some scholars, the first Cross defined Celtic was found in a cave in the French Pyrenees, dating back to 10,000 BC circa; others see its origin as connected to Hindu symbology, representing the union between the masculine and the feminine. 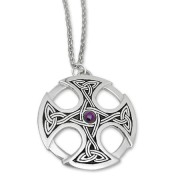 According to Irish tradition, the Celtic Cross was introduced in these regions by St. Patrick, as a symbol of the supremacy of Celtic Christianity, represented by the cross, over paganism, represented by the circle symbolizing the sun, main emblem of the pagan religions. The crosses were erected by the Celts in different parts of Scotland, Brittany, Cornwall and Ireland, often bringing runes in order to invoke the protection of the supreme god against the Viking invasions, or as a safeguard and defense of fields, villages and farms.
Lettura in italiano  –  Lectura en español 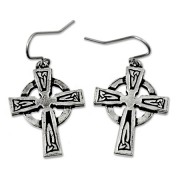 The cross is equivalent to the Celtic Tree of Life: the four elements united to the energy, represented by the circle that intersects them and connects them to each other, the union between the divine energies and man. It was also the symbol of the four seasonal celebrations that marked the passing of the Celtic year: Samhain on November 1st, Imbolc on February 1st, Beltane on May 1st and on August 1st Lugfhnasadh; therefore the crosses made for these events were always enriched with weavings, drawings and figures typical of the Celtic culture and crafts.
The cross also represented the four directions of the Celts, linked to the gods that lived there: the east impersonated the god Lugh, associated with air, which he protected with his spear; the south was the home of Nuada, the fire, his sword made him a defender of the emotions; in the west resided Dagda, related to water, which watched over mind and thought; and finally the north indicated the earth, the body, the seat of the Stone of Destiny, L’a Fàil. 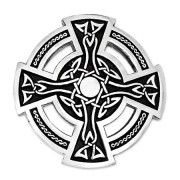 Although many of the crosses erected in Celtic times are still in good condition, the most famous are three: the first is located in the monastery of Clonmacnoise, called the Cross of the Scriptures; about 4 meters high and carved from a single block of sandstone, it is one of the finest Celtic crosses come down to us. The inscriptions are still legible and bear prayers and invocations addressed to the King of Ireland Flann and Colmàn, author of the cross and creator, with the king, of the monastery and of the cathedral. The cross has been divided into panels that depict scenes from the Bible, as the Last Judgment and the Crucifixion of Christ.
The second is the Cross of Kells in Cornwall, part of the fortified monastic complex built in 1193.
The third is the Cross of Meath County, reproduced also on the flag of the County itself, since in that area there is the Royal Hill of Tara, seat of the High King of Ireland.
The culture of the Celtic Cross as a symbol of Irish identity has always been strong, so that in the period of the European emigration – and especially the Irish one – a tattoed Celtic cross acted as a symbol of belonging and identity for those who were away from home.