Rings History and Meanings – The use of the ring in the daily lives of different populations is present since ancient times: Egyptians, Incas and Romans wore this kind of ornament, often decorated with carvings of gods or emperors, thus emphasizing the power of the wearer. Only certain social categories, such as priests or prominent people in the community, were worthy of such a privilege. The ring carved with a divine or imperial engraving justified the wearer’s actions, his honors and glories, inspiring a sense of respect and submission into others. The size and type of the ring revealed the status of Roman politicians, while Pharaohs and Inca priests wore rings with effigies of gods both as a talisman and as a demonstration of the ability of the wearer to protect and guide his own people. During this period it was developed the belief that the ring protected the fingers and the whole hand, which were considered the most sensitive and vulnerable parts of the humand body because they were fundamental instruments of exchange and contact with other people.
ethnic rings

Rings SHOP ONLINE – in the size as your request 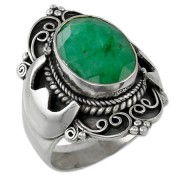 Lettura in italiano  –  Lectura en español
The tradition of the engraved rings can be found in all eastern cultures: only worn by men, Chinese, Mongols and Afghans rings often bear carvings on precious stones that can have different meanings. In some cases they bear the motto or the family name, in others they may bear magic formulas to ward off evil spirits. The material also helps to add value to the meaning: carvings made on Carnelian are more effective, since this gemstone has very strong protective powers.
Even today, people wear “saddle” rings on their middle finger, considered one of the nine gates of the body through which passes the breath of life: closing the “door” with the ring, we prevent the passage of the spirits.
The use of rings as a defense against malevolent entities is still in use among Berber and Tuareg tribes, but in such cultures they may also symbolize the passage of a boy into adulthood or a protection for women in marriage and pregnancy.
In Native American tribes, the rings used to be worn only by chiefs and shamans to prove their superiority, wisdom or strength. Often the rings of these peoples are accompanied by engravings of eagle feathers or real nails of wolves and bears, animals that represent strength, wisdom and survival skills.
In Western cultures, the ring still symbolizes a promise of love, and it is usually worn on the left ring finger, from which the line of heart and love is believed to pass through. The traditional rings best known in the West are the Claddagh ring and the Turkish wedding ring.

The Claddagh is still used as an engagement ring in Ireland: it bears a heart, a crown and two hands. Accompanied by the legend that tells of unrequited love, over time it has become a symbol of eternal and faithful love.
The turkish wedding ring, also known as the “ring of the Sultan”, is composed of several rings joined together that, once separated, can be reconstructed only by knowing the exact sequence of movements. According to legend, a sultan had the ring created to test his subjects: the one who would have been able to recreate a loose ring, was certainly a person with a good heart, who would not committ crimes or theft.
In Western Catholic cultures, the ring of the fisherman plays a significant role: it is used by the Pope as a seal for each document drawn up by himself. A new one is created for each Pope, imprinted with the figure of St. Peter in the act of fishing, and along the edge is engraved the name of the current Pope. At his death, the ring is destroyed, as if to say that when the papacy is vacant, no one will assume his prerogatives.