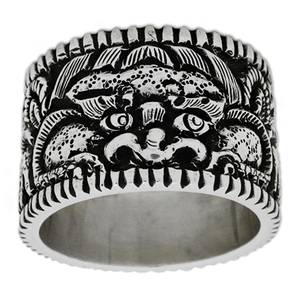 Oriental Rings – ethnic, since the most remote ages, an essential wire shaped as a circle and called RING has accompanied men’s and women’s daily life. Made with the most diverse materials, iron at the beginning, later on with various other components such as gold, silver, stone, glass, fibres, wood, bone, according to the different places and cultures, this object has always attracted people’s interest. This simple ornament has been endowed with particular meaning and symbolism; it has been at the core of rituals and initiatory ceremonies, and credited with supernatural properties: allegory of the infinite, of the eternity, of the perpetual movement of the Sun, of the endless course of Time equated to a wheel endlessly turning. It encloses within itself the representation of perfection, emblematized by the empty circle itself. As a consequence it became also a magic talisman, a precious object marking the person who wore it, whether a king or a priest, a military chief or a pirate: the ring gives people authority and power, offering the possibility to distinguish oneself and to win over others by symbolizing the social status of the individual, and not being only a mere decoration as it was to become later. The ancient Egyptians forged the early rings and decorated them with scarabs and hieroglyphs; the Greeks engraved cameos and seals as the unmistakable sign of its owner. In the East this very same sign got a practical value, in order to seal or sign edicts, decrees, or simple letters. The engraving of seal became an art, and skilled artisans and goldsmiths created splendid jewels for their customers. The ring became synonym with wealth, as well as with bond and kinship; it was often given by sovereigns and leaders to their subjects as a reward for their services, thus establishing with them a strong and close relationship of subjection. Nowadays rings are worn as mere ornament , often as a pledge of love in the finger-ring, the token of the union between two people, thus transforming into a simple modern habit the ancient stories which have always been linked with it. Every people and civilization has had great goldsmiths, who created and made famous extraordinary jewels, and rings have always been one of the favourite subjects of those masters.
Lettura in italiano

As regards Oriental rings, a short history is needed. As it is a little object which can be easily worn, the ring has always adorned hands, fingers and fingertips, feet, and also the nose, with different purpose and meaning. To women, notwithstanding their great love of jewels –mainly for the golden ones– it was simply an embellishment, whereas for men it became an emblem of power, supremacy, and a distinctive sign of their rank and social class.
In India, since the VIth c. b. C., gold and silver matched with precious stones such as ruby, sapphire, coral, and crystals of various colours, were the favourite materials for the making of magnificent rings: the gems, called ratnas and combined together, originated the most famous and powerful of the amulets, the navaratna: a metal bezel was set with the nine stones of Vedic cosmology, each one corresponding to a planet, with the ruby in the centre, corresponding to the Sun. This precious ring accompanies the daily life of the person who wears it, protecting it from all adversities. In Mogul jewelry rings were particularly emphasized: made in gold, they were full of highly valuable precious stones and pearls.
One of the characterizing features of the handicrafts of central Asia was the seal-ring, worn mainly by men: coming from the ancient Hellenistic tradition and with Cretan and Mycenaean influences through the Phoenicians, the use of rings with engraved seal spread in the whole area, and they became an object much looked for and much demanded by the nobles of the time. Sultans and caliphs wore them, and often gave them as gifts to their concubines and dignitaries, as well as in exchange among members of their family as a sign of bond and defense from evil. The seal-ring in gold or silver and semiprecious stones such as cornelian, imported from India and employed for its protective qualities, had both a talisman purpose and a practical one: on the stone were engraved magic spells to protect the owner, as well as its name –in such case the ring was employed to validate letters, proclamations, and any other document issued by powerful personalities such as princes and chieftains. The seals were often engraved with imaginary winged animals, such as horses original from the Minoan areas, and also with ancient gods such as Ares and Pallas-Athena, which may still be seen on ancient rings coming from Afghanistan.
In China became famous the thumb-rings, said bowman-rings, called Lei in ancient times: they were devised in such a way as to protect the thumb from the stretched bowstring of the hunting bow, and to prevent from painful wound to the thumb. Rings cut from one only block of jade, a stone reputed magical and charged with numberless virtues such as goodness, wisdom, courage, rightness, spread throughout the whole Asia and later were made with other stuff such as silver, bone, wood, and other stones less precious than jade. Mongolian tradition imported rings from neighbouring China, in particular from Manchuria, a region geographically bordering with Russia.
Tekke people from Turkmenistan would make, and still do, stunning silver rings wrought with elegant and refined vermeil ornamentations, the ancient technique of hot gilding: each single piece is a little treasure of craftsmanship and skill, a recognition for the local goldsmiths.
In the whole region including Ladakh, Nepal, and Tibet are used, beyond silver, semiprecious stones such as turquoise and red coral: the former is the symbol of Air, the latter of Fire, two fundamental elements of their traditional culture. These materials, mixed together in an unique object, create a successful and valid talisman, giver of energy, vital spirit, courage and resistance against any adversity.