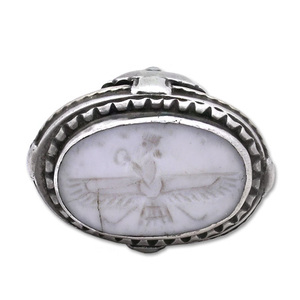 Asia is a most wide and mysterious continent, with different climates and mythical populations going back thousands of years: horsemen of the steppes, nomads of the Middle East, sumptuous Indian palaces, head hunters of the jungles, monks living on the “Roof of the World”, and imperial China splendours. Nomadic and semi-nomadic populations living in and moving through Asia use to wear and carry their wealth as jewels, so that women from TURKMENISTAN, on their wedding day, may wear up to 17 kilos gold and silver as ornament. In these populations, where horses still have a great social and practical value and importance, not a few jewels are realized for the very horse-gears: splendid saddles, bridles and harness are decorated with silver, carnelian, and coral. The Yomud Turkmens wear jewels not only as bracelets and armbands, earrings and necklaces, but also as pectorals/breast-plates, shoulder-plates, belts, headgear and pendent for their hairdos. These are often highly elaborate jewels, full of pendent and chains with silver and gilded silver surfaces, geometrical patterns/designs, arabesque patterns, and red gems encrustations. Red is the favourite colour of nomads because its symbolism is closely connected with blood and, as a consequence, with vital force itself. Coral (Corallium rubrum), particularly the variety coming from the Mediterranean Sea, is not merely a gem but a true talisman, without which it is impossible to begin a journey through the desert. The “Roads of Silk” that from China reached the Mediterranean were travelled by in the opposite direction, and got the name of “Roads of Coral”.

In the HIMALAYAS, the dwelling place of the Gods, in Tibet, Nepal, Ladakh, Buthan, jewels literally cover people’s clothes. One of the favourite gems is turquoise, symbolizing Air, Water, and Sky. Ladakh women wear heavy hairdos wherein their hair is interwoven with felt and red cloth interspersed with turquoise. Turquoise is a talisman both for the spirit and the body, and is endowed with medicinal properties.
Besides turquoise, also coral is much appreciated, evidence the stories by the Venetian explorer Marco Polo (1254–1324). Together with turquoise and coral there is also amber, whose most precious quality is imported from the Baltic countries. Necklaces are strung with little black or brown agate beads, called Gzi, which are believed to have adorned the Gods themselves, and to have been thrown by the Gods on the Earth, when they were broken or faulty; other legends tell that Gzis are the droppings of a mythical bird feeding itself only on precious stones. In Lhasa (Tibet) both women and men pierce their earlobes and wear earrings because people who do not wear them run the risk to be reincarnated in a donkey.
Since the most ancient times, INDIA has always been one of the most important centres for the trade of precious stones, and many of the most spectacular and famous stones have been mined in Indian fields: they now belong to the most precious jewels in museums collections, and are in the Treasure of the Crown of many European monarchies.
To Indian, jewels are a kind of “Identity Document” revealing the group a person belongs to, his/her spirituality, rank, and superstitions; nothing is casual: every shape, decoration, and material employed have a precise meaning. The jewel is the characterizing element of a person, a means for the observer to understand at a first glance whom he has to do with. Precious stones literally cover Indian jewels, gold being often used merely as base and frame.
Indian mineral resources nowadays are still unnumbered; besides diamond mines there are also rubies, emeralds, sapphires, beryl, and many more.
The most common cut is cabochon, a smooth and round one; stones are often drilled to allow a pin to pass through.
Also enamels are much used and appreciated, because India is so fond of the colours and brilliance of precious and semi-precious materials.
Not only stones and precious metals are employed to create jewels, but also seeds and parts of plants considered as sacred. In such cases jewels are, therefore, real talismans. The search for the Rudra seeds (Elaeocarpus Ganitrus) is a proper treasure hunting, wherein seeds are valued on the basis of their shape, pattern, and rarity, and then set in the jewels as beads and pendent.
The favourite themes of Indian jewellery are sacred scenes and Hindu and Buddhist gods and goddesses; another theme is naturalistic and consists in stylised decorations of garlands, flowered branches, and also in animals, one of the most frequent being the peacock (Pavo Cristatus), original from the Indian forests and introduced in the Western world by the Romans.
A typical Indian jewel worn by women is the nose pendent, which may be richly decorated as the very traditional earrings.
In the SOUTH EAST OF ASIA, Indonesia, the Philippines, the Golden Triangle, and Korea, jewels are closely connected with sea materials: seashells (Ciprea Moneta, Tridacna Gigas etc.) mother-of-pearl, turtle, but also rush/reed-wood, horn, snake vertebrae, crocodile and wild pig teeth/fangs.
Metal jewels are decorated with thick filigree webs and granulation, the metal little spheres having different greatness to liven up the surface itself.
Another kind of decoration, frequently employed in South East Asia is the niello intaglio on silver, with stylized vegetal webs, deriving from Muslim culture and art.
Highly frequent, mainly in Indonesia, are designs of buildings such as houses and temples, symbolically representing the Cosmos and creation.
Also in CHINA the jewellery tradition is thousands years old, and one can not talk about Chinese jewellery without thinking of jade, the name given to the minerals nephrite and jadeite. Jade is valued not only as a precious stone, but also as having special spiritual and magical powers; jade animals were drilled to be hung on cloaks, and presumably also worn as pendent.
Besides jade, Chinese jewels are decorated with bone and with silken stripes, often coloured red.
Chinese jewellery includes above all ornaments for women’s hair such as hairpins and clasps; men wear belts and pendent. In recent times rings have been realized, and earrings are highly appreciated too.
In China the techniques most commonly employed for the manufacturing of precious metals are openwork, filigree, and granulation, which can be realized for opencast decorations.
The most recurring decorative themes and images are clouds, the dragon, and the phoenix: the dragon represents the strength of the Universe and is associated to longevity and wisdom; its five claws being the Emperor’s symbol; the phoenix or Fenghuang is a very ancient and important symbol also in Mediterranean cultures (the Arabica Phoenix being a mythical bird resurging from its own ashes), and in China it is the symbolical animal for the Empress.