Oriental jewels, with its particular richness of precious, colored patterns, brings back to us an atmosphere of magic, mystical and fascinating, reconciling elements of maximum splendor and elegance with themes from a deep cultural tradition. Asia was inhabited mostly by populations of nomadic shepherds who considered their jewelry as wealth, as it was easily transportable and convertible to cash. Next to its function in commercial exchange, its meaning linked to tradition, culture and religion remains unchanged: verses of the Koran carried in a breastplate, headgear embroidered and adorned with plaques of silver, earrings and bracelets that sport stylized animal forms, clips and headdresses in silver, belts and daggers: all of these gems were created inspired by antique models used for centuries. The Orient is the land of an extraordinary craftsmanship in gold, in which stones are used as accents according to their protective or astrological value: the nine planets of the Indian solar system are each associated with a precious stone and then represented in the jewelry called “Navaratna”. 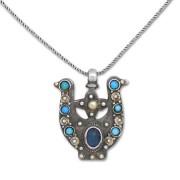 Refinement of Oriental craftsmanship to its apex were the Moghuls, who made jewelry that was the perfect example of a prince’s dignity: they yielded to the impulse to use precious stones and returned enamels to fashion, adopting brilliant color after brilliant color and sparkling colors never before used, such as pigeon’s blood, turquoise, mimosa yellow and peacock blue. All of this magnificence was well served by the mastery of various ancient techniques of workmanship such as metal threshing, embossing, filigree, and stone cutting and polishing.

Lettura in italiano  –  Lectura en español
In Turkmenistan, thanks to the women, the jewelry they wear hands down and transmits the traditions of this people: on their wedding days, they can wear up to 15 kilograms of jewelry, which in part they must wear during the whole first year of marriage and which at the birth of their first child will be enriched by a spectacular crown. Only after this can the wedding jewelry be taken off, piece by piece over time, and they will continue to be worn for ceremonies, rites and holidays. Through ornamentation, the woman becomes deified, and the grace of her figure in brought to the forefront: ankle bracelets, toe rings and hair ornaments confer onto Oriental women an almost regal quality. 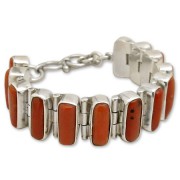 Another constant font of inspiration is the landscape, melded with a continuous succession of religious and mythological connotations. A large number of decorative elements trace their origins to natural themes, such as flowers, fruit and seeds, mixed with the tradition of metal working: Gold, representing the sun and bringing physical well-being, imitates the Ganges River, and Silver, symbol of the moon, is linked to the Jumna River.
In antique texts, jewels manifested the conditions of the gods and were venerated by them: Vishnu, Sapphires, Indra, rubies, and Shiva, Hyaline Quartz, the purest. Also among certain populations the use of jewels performs a role of great importance: women, in order to stimulate fertility, wore the cosmic egg, an oval Hyaline Quartz, perfect, enclosed in a Silver case.
In the Himalayan region, the residence of the gods, finely carved jewelry was worn, sculpted and rich in symbolism. Turquoise was particularly valued, the dominant stone of this handiwork, used for its color, which represents the sky, water and air, and for this reason is closely linked to human destiny.
Among the most popular ornaments we find the GAO or GA’U, reliquaries of various different forms: rich and singular in their craftsmanship and in the stones used to make them, they contain prayers and magic formulas used to placate evil spirits. The power of these invocations is greatly increased if it is associated with decorations and materials containing symbolic meanings: Turquoise and Red Coral are the preferred stones, representing air and fire, and their union expresses the completeness of the elements and natural energies. 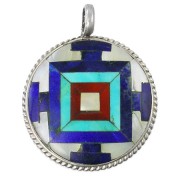 Culture and traditions closer to the relationship between humankind and nature are identifiable in the Naga tribe, the headhunters who lived in the mountains of Assam. Theirs are not ornaments, but affirmations of status which communicate the social position of an individual inside his own group and are worn until death. The privilege of the use of such ornaments is full of precise rules and restrictions: only warriors who have killed wild boar during a hunt can then wear their tusks; someone who wants to buy an ivory bracelet must do so through an intermediary who will draw upon himself any possible curses. Warriors of various clans distinguish themselves thanks to the diverse decorations they wear, from necklaces made from elephant tusks to those with parrot feathers, the preserve of the most courageous, depending upon the quality of the materials used to create them. 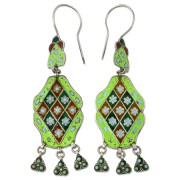 Also in Borneo, which was reached, differently from the Naga tribe, by ancient merchants, the traditions of the local culture were maintained: glass beads from the XVI century were worn at the neck and wrist to impede the soul from leaving the body, as well as being woven into cloaks worn during rites performed in order to maintain the balance and harmony between humankind and the cosmos; in the same way, shell bracelets protected from adversity.

In conclusion, in this geographic area of jewelry, beyond its solemn symbolic value, jewelry was and currently is an important good of exchange, as dowries given to women on the occasion of their weddings and therefore as something to have that will remain their property in the future, and as a means of acquiring material goods, such as cattle and other products to sustain daily life.