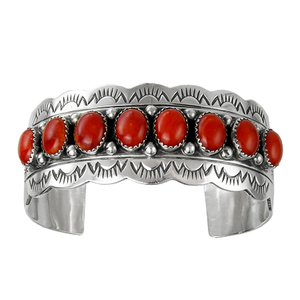 Native American Jewelry, stories retold and passed down and archeological ruins testify to the great importance that the Native Americans attributed to jewelry in everyday life and, for millennia, they produced necklaces, pendants, bracelets, rings, earrings and buttons. The indigenous tribes of North America are multiple and various, with idioms and cultures that are often different from each other. Also religion changes from one tribe to another, but the fundamental principle is always one of a close relationship between the Divinity, Humankind and Nature which is expressed in a balance of reciprocal respect and love. From the XVI century, with the arrival of the Spanish Conquistadores, the villages of the natives were renamed pueblo, which means village in Spanish, words that were then used by the tribes of natives themselves. The Spaniards introduced their own culture and often induced the natives to convert to Christianity, using missionaries who came off their large ships, together with soldiers and merchants.
Lettura in italiano  –  Lectura en español

These factors modified the original indigenous cultures but did not manage to completely change them; many elements were reworked and others instead managed to survive into modern times.
In the modern era, in the second half of the 1900s, native Americans were at the same time both confined and preserved by the creation of, in the area including New Mexico, Arizona, Colorado and Utah, areas and natural parks where they could live respecting their own habits and culture.
Among all the native tribes, those which stand out for their production of jewelry today are the Zuni and the Pueblo of the Rio Grande in New Mexico, the Hopi in Arizona and the Navajo, whose area spreads between Arizona, New Mexico and Utah.
The North American Indians, like those of South America, are great lovers of feathers (especially those of the Ara parrot, of which the blue variety has recently become extinct). For the natives, its feathers represent Wambli Galeska, the Great Sacred Eagle.
Feathers are found also in jewelry and in ritual instruments; the talent lies in choosing them, cutting them and assembling them.
Besides feathers, the materials most used and appreciated are shells, often engraved, bone, terracotta and wood; while among the stones used there are turquoise, argillite, malachite, catlinite, also called pipestone because it was used to make pipes, very important objects in native culture, and serpentine.
Turquoise stone, called “heaven stone,” also in older times, has a great value and always, as in the Himalayan area, therapeutic, magic and religious properties were attributed to it, so much so that even today the stone is used to bring good luck, health and joy.
Coral, probably imported by the Spanish in the XVI century, is a much-appreciated material, and it is often used together with turquoise and silver. Gemstones are used unpolished as nuggets or sculpted into animal, feather or claw forms and then drilled with a stone to be transformed into pendants and amulets; often they are polished and, when not used as pendants, usually they are set in cloisonnè jewelry.
The oldest pendants, in hard stone, even before the arrival of the Spaniards, have the forms of symbolic animals such as the tortoise, frog, snake, female dog (which in mythology transforms into the Water Goddess, protector of fertility and children) and crow (Nas-caki-yel, who created mankind from a leaf and, like this leaf, they must be born, grow and die). Still today we can find this rich cosmogony in small sculpted amulets and necklaces. The Navajo created large necklaces with strings (joclas) of small turquoise stones and heishi (pierced rounds of various dimensions) often made of shell or coral.
Joclas at one time were used as long earrings; in this form, nowadays they are hung from necklaces to enrich them.
Also silver was introduced by the Spanish, and today the Navajo and Zuni tribes are wonderful silversmiths.
The first Navajo jewelry in silver dates back to 1860 and in general, all those made before 1920 are considered quite old.
In many aspects, the decorations on this jewelry refer to important elements from the Old Continent in the XVI century: clips, pins and rings follow forms that probably refer to Spanish saddles and bridles, as in the case of the concha (shell in Spanish) belt buckles.
Also the necklaces have decorative elements that echo the style of the Conquistadores, and in the case of the Squash Blossoms, necklaces that were worn by both men and women and that probably copy the forms of pomegranates and horseshoes, important symbols for the Spaniards.
The oldest examples of this type of necklace are sober; they don’t have many pendants and they are made of only silver.
Along with necklaces, the Native Americans also loved to wear large silver bracelets, sometimes enriched with leather or stone, called Ketoch, whose tall, elongated form derives from the fact that in the past they were worn by archers and made of leather. This type of jewelry is among the oldest ornaments of the Navajo.
The jewelry of the native Zuni is distinguished from that of the Navajo by more complicated decoration and a love for mosaic designs created with a multitude of polished stones placed side by side.
Another decorative element was grizzly bear claws; to possess the grizzly’s claws and skin were a sign of great courage. When the grizzly bear became a protected species in danger of extinction, grizzly claws were reproduced in other materials (silver, clay, bone, etc).
In the last 60 years, innovation in Native American jewelry has been lead by three artists: the Navajo Kenneth Begay (1913-1977) and the two Hopi Preston Monongye (1927-1987) and Charles Loloma (1921-1991). From prehistory to today, the charm of Native American jewelry survived by changing and enriching itself with inspirations, styles, cultures and materials, always maintaining, however its deep cultural identity.