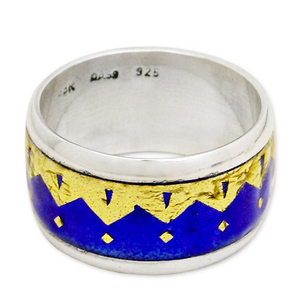 Jewelry in the Mediterranean Basin or the sea between “our lands” or Mare Nostrum, has always been the cradle and forge of a culture and handicraft that, notwithstanding the variety of people who live in it, maintains a basic foundation that can be considered a note of communal vibrancy. The waters of the Mediterranean have always been an optimal vehicle for the exchange of materials and manufactured products and for the circulation of people and cultures, and surely they are a source from which all of its cultures have drawn: a heritage of habitats, ecosystems, plants, scents and colors which has been shared for millenniums. The tradition of gold-working in Ancient Egypt has passed down to us some of its symbols by way of various populations: the talisman with the god Horus or Ra’s eye came down from the Greek and Turkish cultures–and then more extensively from Islamic cultures as Hallah’s eye and in the Christian religion, contained within a triangle, as God the Father’s eye; the stylized symbol of the lotus flower has passed over the centuries, morphing into a “saw palmetto” and acanthus in Greece and with the Etruscans and the Romans, becoming a stylized racemo or botanic symbol in the Islamic culture in order to then become a part of Romanesque, Medieval and Renaissance Christian culture in the form of garlands, branches and fronds.
Lettura in italiano  –  Lectura en español

Coral (corallium rubrum, typical of the Mediterranean seabed) has always been an important resource for Mediterranean jewelry, but also an important trading good for silk, incense and the precious spices that were imported from the Arabic peninsula and the Far East.
Coral is a strong good luck charm, an amulet linked to the life force; so much so that even today newborn babies are given a small bracelet, a branch or a pendant in coral.
The myth connected to coral dates from Ancient Greece, where it is said that coral is the petrified blood which came out of the head of the Gorgone that Perseus slay. In Christian symbolism, during the Middle Ages and the Renaissance, the coral in the hands of the baby Jesus was a symbolic warning of his future passion.
Used in rough branches in Morocco or finely sculpted in Torre del Greco, coral is one of the most important patrimonies of our culture, besides being a fundamental element of our native flora and fauna.
Glass or glass paste-working as jewelry decoration as beads was passed down from the Sumerians to the Egyptians, and from there to the Phoenicians and the Greeks, finally becoming, through the Ancient Romans and the Byzantines, a central part of Venetian artistic handiwork dating from the Middle Ages.
The Mediterranean production is mostly Venetian and is of colored and decorated glass paste, in flower (millefiori), mosaic (murrina), and chevron patterns which have always captivated and enthralled in North and Central Africa, becoming also deeply inserted into Islamic culture.
One of the characteristic methods of metalworking of common Mediterranean jewelry is filigree; abstract, scribbled or botanical designs fill, in light compositions, pins, bracelets, earrings and necklaces in the most varied and bizarre forms: butterflies, flowers, spheres, evening purses.
In Italy, filigree was present in the art of Etruscan goldsmiths, while from imperial Roman goldsmiths we find jewelry made from light filigree. The Byzantines produced in the XIII century fantastic masterpieces that, following the Crusades, spread from the Eastern Mediterranean to Venice (opus veneticum) and Genoa.
In Venice, in the XVI century, splendid and delicate round beads of filigree were produced, filled in with colored enamels.
Other important centers of filigree production in the Mediterranean are Croatia (Dubrovnik) and Spain. Over the XVIII and XIX centuries, the Genoese became masters of this branch of handiwork while in Sardinia “buttons” of filigree with false granulation and stones are typical.