by
10 Settembre 2018
History and Simbology

Here you can find our Celtic products on ethnos

It is not possible to speak of Celtic jewelry without making an introduction on Celtic culture.
Scholars call Celts those people who gave birth to a civilization that developed around 1000 BC in Hallstatt (Austria), to reach its highest artistic, social and spiritual expression in 300 BC, spreading throughout Europe from England to Spain, France and Germany. Although there are no boundaries or specific dates that indicate the exact time when these people settled in Europe, we know that they originated from Indo-European strains and that, once settled in these regions, they were able to integrate their beliefs – as the ancient cult of Mother Earth goddess and of femininity – with the masculine characteristics of the existing solar deities, completely transforming the culture of the time and creating a new way of interpreting the relationship between man and spirituality. 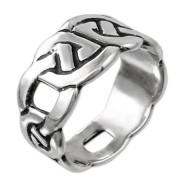 The Celts and their culture represent the deepest and most ancient roots of Europe, those that still retain the idea of the ancient bond with nature that Druidic religion had taught: Celts in fact must be considered as a culture rather than a people. They did not create an empire ever, nor adopted the concept of state; their social organization was made up of tribes or clans who recognized themselves in a common ancestor, often at war with neighbors over the ownership of goods or livestock. They did not fight for the conquest of the land: private property was measured in the possession of livestock and valuables, while the land was common property of the clan. The Celts were breeders, farmers and hunters. Their social division was done according to the pattern of expression of the divinity, because the Druids – wise men, priests – claimed that there was only One God, unknowable and unreachable, which was expressed in the three basic forces: Strength-Power-Will; Science-Knowledge-Wisdom and Love-Creativity-Productivity.
Druids were the “Science-Knowledge-Wisdom,” were masters of Wisdom and knew the size of earth and of cosmos, and the will of the gods; they passed on their knowledge in sacred woods and caves, and ensured the immortality of the soul and life after death.
Warriors were the social manifestation of the “Strength-Will-Power” and among them every year was elected a chief, and a general in case of war.
Finally, the class of artisans was the expression of the impetus of the divine ‘”Love-Creativity- Productivity”. 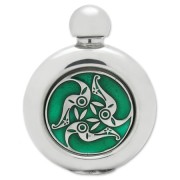 The knowledge and use of the energies of man and nature, the cycles, the power of speech over elements, were all characteristics present in the Celtic spiritual tradition. The Celts became the progenitors of an ideal spirituality able to go back and see the Earth as our Mother, Heaven as our Father, and the countless forms of Life as a tangible sign of their presence. The Celtic people are associated mainly to the mythical aspects of their tradition, of their spirituality and artistic expressions. Wearing jewelry that reproduces the ancient Celtic symbols becomes a way to reaffirm the sanctity of life in all its expressions, believing that the greatest good of man is a Freedom that goes beyond ideologies. 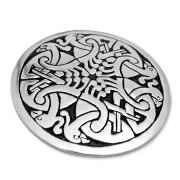 The knowledge of Celtic symbols is therefore essential: they were the concrete manifestation of a Higher Spiritual World, and possessed a sacred meaning. Each one carries a message, a different way of dealing with Life, but also with our own soul. Symbols, for the Celts, had the task of uniting the outer world with an inner meaning, in the form of a state of mind, intuition, emotion, consciousness.
They represented an external reference that had to evoke and provoke an internal event: combine the world of matter with that of the human soul. Symbols spoke the language of the depth of being, a mean to come into contact with the inner realms of the human mind; they acted as channels, bridges to higher energies. Their antique jewelry, signs, objects, and images are still being used and adapted, recognizing in the Celts and in their cultural roots and a base on which to rebuild a lost identity.