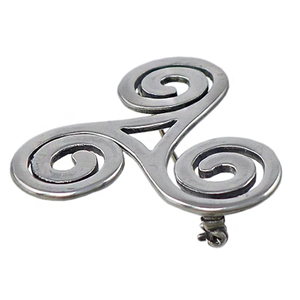 Celtic culture seems to have been already formed around the third millennium B.C.E. It represented the most important center of population in Europe during the Iron Age, and already classical sources were using the term “Celtic” (from the Greek Ksltoi or Ksltai) to describe a population speaking an Indo-European language. In their period of highest splendor (the IV-III centuries B.C.E.), the Celts were spread across a wide area of Europe, from the British Isles to the Danube basin, as well as in other isolated encampments further south, as a result of their expansion toward the Iberian, Italian and Anatolian peninsulas. United by ethnic and cultural origins, by sharing the same Indo-European linguistic base, and by the same vision of religion, the Celts always remained divided politically; among the various groups in the Celtic population are the Britons, the Gauls, Pannonians, the Celt-Iberians and the Galatians, housed respectively in the British Isles, the Gallic Empire, Pannonia, Iberia and Anatolia.

ALL CELTIC COLLECTION ONLINE FOR SALE

Physically, it seems that the Celts were blond and mighty, that they bleached their hair with clay, they decorated themselves with gold and silver jewelry, and that their appearance often evoked fear in their enemies. Other people were afraid of them, but at the same time, full of admiration for them.
Archeologists divide Celtic prehistory into phases which take their names from the areas in which many of their objects have been recovered: the Hallstatt Period (VIII-VI centuries B.C.E.) in Austria and the La Tène Period (VI-II centuries B.C.E.) in Switzerland. The Hallstatts were very able in working and using iron, with which they produced the armaments that insured their dominance over other groups, while the later period of La Tène is also called “The Era of the Princes” because of its spectacular burial grounds and imposing fortifications, which appear thanks to a sudden wealth among the Celtic aristocracy.
Extracted in a spongy form, the iron was first forged and distributed in double pyramid-shaped ingots; later the ingots were substituted by long, flat bars, already ready to be formed; the same bars were also used as money, together with copper and gold coins. The Celtic societal unit was the tribe, which contained diverse social groups: nobles, knights, farmers, artisans and slaves. From the learned class came also the Druids, sacred intermediaries between men and the gods; archeologists believe that the Druids used as altars and temples the blocks of stone known as dolmen (from dol = table + min = stone). The most important Celtic divinities were: the mother goddess — Tuatha de dannan; the king of the gods — Nuada; the father god — Dagda; the goddess of fire — Bobd; the goddess of poetry — Brigid; Angus — the god of love;Donn — the lord of the dead; Lir and Manannan — the gods of the sea; Lugh long-arm — the warrior god; Diancecht and Miach — the gods of medicine; Artaios — the messenger of the gods; Goibniu — the blacksmith of the gods; Credne — the god of metallurgy.
Some information about Celtic mythology is furnished by the recovery of ritual objects, such as the Gundestrup caldron, a huge, silver “pot” with embossed decoration found in a Danish swamp. For the Celts, basins possessed an important ritualistic value: they symbolized the feasts that were held in the afterworld. Other containers such as jugs and pails served more practical purposes and were called situlae.
The repertory of decorative patterns included knots, geometric braids, stylized plant and animal shapes, spirals and keys; animals in particular were preferred subjects: above all dogs, deer, birds and wild boar.
Also a series of vegetative elements had religious significance such as holly, mistletoe, oaks and woods and there are many ceremonial accessories or sacrificial objects dedicated to lakes, rivers and swamps.
The Celts had a notable taste for bright colors in both jewelry and fabrics, as shown still today in modern Scottish plaids; Diodoro Siculo says that “the Celts wore surprising clothing, multi-colored tunics, and trousers called ‘brache’. Over these they wore short, multi-colored, striped cloaks, held closed with a brooch or pin, and made of furry cloth in the winter and smooth fabric in the summer.” The Gauls preferred tights, the Irish tunics, and all of them wore cloaks whose length was indicative of their social standing.
Jewelry-making is the artistic branch of the ancient Celts from which the most evidence has survived.
The fibula is an antique piece of jewelry similar to a large safety pin, produced since the Micenaean Age: starting from the V century B.C.E. Celtic artisans transformed them from simple bars into imaginative representations of dragons, birds and masks of human faces. Large circular pins had a typical form with an opening at one point to allow the passage and the security of the needle. The pins were worn by women at the breast and by men on the shoulder.
The most famous example is the Tara Brooch (VIII century A.D.). The entire surface of the piece is covered with delicate engravings of spirals, braids and animal motifs, while the border of the ring sports tiny griffins and fish tails.
Torques, semi-circular necklaces or armbands in gold, silver or bronze that often showed human or animal heads to excess, are also typical of Celtic handiwork. Besides being reserved for only the highest social sects, torques also had a religious meaning: they were mystical objects, integral parts of the people’s identity and catalyzing talismans that brought man closer to the gods, concentrating mystical energy on their owner’s bodies. The most common metal used was silver, sometimes as an alloy with copper and the principal technique was fusion. If the alloy was lacking in silver, the object could be covered in tin to simulate silver.
Metal objects, after being forged, were beautified with applications of colored materials. On numerous artifacts from the IV century B.C.E. have been found evidence of fusions of coatings, obtained with a particular glass paste. This red coating was originally soldered using a fine iron mesh, along with Mediterranean coral, directly on the objects. From the III century B.C.E., with the evolution in fusion techniques, new objects were developed, such as multi-colored glass bracelets, and new techniques were developed, such as the direct application and fusion of coatings without the use of support structures. New colors, such as yellow and blue, were introduced starting from the II-I centuries B.C.E., even if red remained the predominant color because it symbolized the life force.