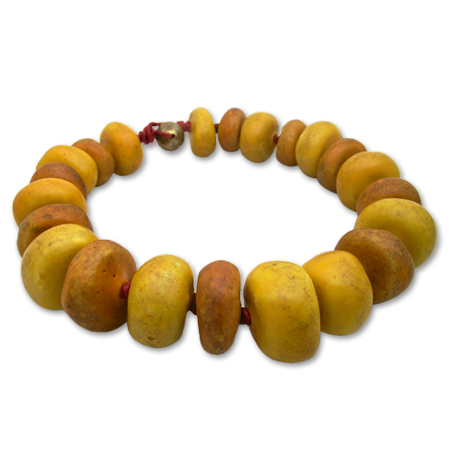 ALL AFRICAN COLLECTION ONLINE FOR SALE

Most wonderful jewels have been manufactured in Africa since prehistoric times. The most ancient one is a necklace found in Morocco, in the Pigeon Cave of Taforlat, dating 82.000 years ago, and consisting in seashells of similar shape and size, dyed in red ochre pigments, drilled, and strung in a natural fibre thread (leather, tow, horse- or vegetable hair). Africa is a most wide continent, it is the cradle of mankind, and has always been inhabited by several populations, so different among them as regards habits, traditions and customs. African jewels often represent not only the real wealth of a person, but also his/her history since they accompany him/her throughout his/her whole life, and mark the most important moments of the existence. So important is the fashion of body decoration in Africa, that people not only wear jewels, but also paint their skin with motives/patterns realized with natural colours (mineral and vegetal), with piercing and scarification (scars/cicatrices). In Ethiopia, young women of the Mursi tribe insert in their lower lip a clay labret made and decorated by themselves with ochre and black carbon patterns, to signal the number of heads of cattle required by the family as dowry for the marriage of the girl herself.
African jewels are often used as talismans, thus displaying special shapes and having precise purposes: anklets represent the particular snake whose bite people want to be protected from; Camerun dignitaries wear around their neck talismans adorned with buffalo heads to symbolize strength and cunning; Dogon warriors wear rings with horsemen figures for their ritual prayers.
African jewels are eclectic also as regards the finding and use of materials, which are characterized by shared symbolic meaning. The most common are gold, bronze, hard-stones such as carnelian, amber, quartz, amazonite, chalcedony, glass beads, animal parts such as leather, hair, bones, claws and teeth, or vegetal materials such as berries, seeds, wood, and seashells.
In Africa seashells are endowed with such a great symbolic meaning and economic value, that up a few decades ago commercial compositions were carried on through the exchange of the Cauri seashell (Cyprea moneta) which was fished in the seas of the Maldive and Laccadive islands, and exchanged for gold. This is the reason why seashells have never ceased to be used as jewels among almost all African populations, fixed on leather or vegetal surfaces together with glass beads.
Since ancient times glass beads have always been a highly precious and sought-after material for the realization of jewels; they change their meaning according to their colour and decoration patterns. It is still possible to find glass beads (both single or in complete jewels) dating to Phoenicians, ancient Romans, Byzantines and, above all, Venetians, these latter from the Middle Ages, when Venice became the most important centre for the production and export of glass beads throughout Europe and Africa.
Nowadays glass beads are produced not only in Venice but also in Eastern Europe, Bohemia, and China.
Among the most valued ones are the Krobo pearls/beads, which have been produced for over one thousand years in Ghana with recycled glass and broken pieces.
In western Africa rings, pendants, bracelets, and anklets are made up in bronze, through the cire perdue technique followed by forging/moulding.
Among the nomadic populations of Niger, girls wear heavy anklets forged by the local Haussa blacksmiths from metal ingots, and engraved with Islamic patterns.
Anklets are often big and heavy and they represent the dowager of maidens, as it occurs with the Liberian tribe of Kru; they also protect the wearer form evil spirits.
Gold has always been abundant in central Africa and along the course of the river Nile, due to numerous alluvial deposits, so that in ancient Egypt it was said that in this area it was so common and so easily found as the desert sand and, in the Middle Ages, Arabian geographers report the trade of small spiral rings coming from Wangara, “the Land of Gold” or “Golden Land”.
When Portuguese, Dutch, French, and English colonized the western coast of Africa (present Ghana) they called it Golden Coast. In that area, during festivals and celebrations, in the city of Elmina the Chief Akan adorns his arms, legs, neck with chains and jewels of various shapes, and embellishes his hairdo and beard with golden pendent and rattles.
The highest ranks of Akan still wear big hollow golden bracelets, embellished with designs recalling the shape of the branches of a local native shrub, a very tough one, which is used to build cottages and is a symbol of fertility.
In South Mali, women of the Fulani tribe realize four-lobed and spiral golden earrings so heavy as to tear the earlobes, were they not strapped to the head of the wearer, or wrapped round the ear itself by thread strings (usually red).
Such lavish earrings are worn together with necklaces with bi-conical pendent and amber beads, and with nose ornaments.
Where people can’t have golden jewels, these latter are replaced by straw models whose colour is strengthened with saffron powder and henna.
A very successful jewel in recent times has been the false golden watch, made up with 24 k. gold, but lacking the complex Swiss mechanism to indicate the hours. A really original jewel!